Again, The Laffer Curve! And A Tease For Tomorrow! Kansas Is Key!!! 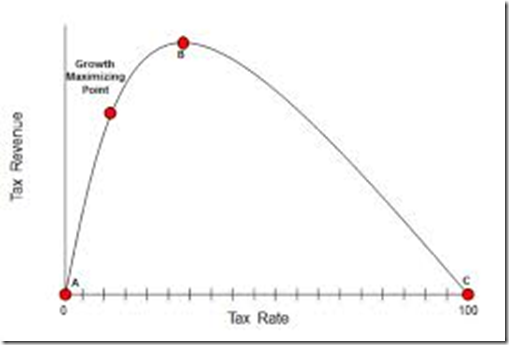 So, I had a couple of things to deal with today, and I’m not feeling as spry as I wish, so I won’t get to lay out some things as I wanted to today. But, with rain, there’s a rainbow! I’ll split this, and, hopefully, by splitting, make more sense to the lay person.

For the people who already know of such, it never hurts to see this.

Wiki does a piss poor job of explaining the Laffer curve, but, I’ll quote a bit of it.

In economics, the Laffer curve is a representation of the relationship between possible rates of taxation and the resulting levels of government revenue. It illustrates the concept of taxable income elasticity—i.e., taxable income will change in response to changes in the rate of taxation. It postulates that no tax revenue will be raised at the extreme tax rates of 0% and 100%…